This week Hull United Women’s Development faced Malet Lambert in the East Riding Cup at Leven and were looking to improve on their defeat a few weeks prior.

United started strong from the kick off with Captain Chamaine Pinder and Vice-Captain Aimee Ayre dominating the midfield and cutting off the through balls to the Malet strikers limiting their attacking threat. Sarah Walters returned to the squad after some time away and didn’t put a foot wrong all game providing composure and support to the United defence. Sarah linked up well with Kacey Watson and Rosie O’Rourke in the United defence offering an outlet when the opposition were operating their high press. Around 20 minutes played United were starting to come under pressure in their own half. However, after some great football in the centre of the pitch a through ball was played through the heart of the Malet defence for Ellie Smirk to latch onto before firing the ball into the top right corner of the net. Malet 0 – United 1.

United’s confidence grew as the game progressed and they pressed high as a unit cutting all angles off for the opposition. Charley Sutherby and Dani Walker Muff Burke connected well on the left side of the pitch, while bringing Josie Groves into action troubling the Malet defence. An early injury to Charley Sutherby brought Lucy Attree into the action and was soon brought into the game after a brilliant tackle stopping the Malet advance. Sarah Walters distributed the ball well across the park finding Gemma Bentley on the right side of the pitch who fed Kim Ward down the right flank to send a threatening ball across the face of the opposition keeper, however United were unable to add to their lead. Malet broke through the United defence but were soon turned around when United regained the ball and were on the counter attack. Aimee Ayre picked up the ball in United’s own half and sent Ellie Smirk and Dani Walker Muff Burke through on the attack and to pressure the opposition keeper. After a miskick by the keeper Dani Walker Muff Burke was able to place the ball into the back of the net from close range. Malet 0 – United 2.

Lucy Witty was introduced to give Kim Ward a breather and soon found some space on the right wing and allowed Gemma Bentley to overlap confusing the defence but the final ball was played behind united so the threat was prevented. United finished the first half strong and went into the break with huge smiles on their faces as well as on the faces of coaches Mel Marsden and Chloe Robinson.

The game restarted and United were looking to add to their lead and put the game to bed. It didn’t take long for United to find the back of the net after Kim Ward won the ball back on the halfway line. Kim set the ball back to the Josie Groves before playing the ball over the top of the Malet defence for Ellie Smirk to be through on goal once again placing the ball into the bottom corner. Malet 0 – United 3.

It wasn’t long before United added another to the tally when Chamaine Pinder found herself in acres of space in the midfield from a Malet goal kick and played Josie Groves through the defensive line as she made a diagonal run across the front of the United defence and slot the ball in the bottom corner. Malet 0 – United 4.

Josie was in on the action again after a Malet free kick was well defended by Rosie O’Rourke and Kacey Watson who allowed Gemma Bentley to feed the ball to Aimee Ayre who saw Josie making yet another diagonal run across the Malet defence. Josie latched onto the ball and drove the ball home just inside the 18 yard box; Malet 0 – United 5. Shortly before the full time whistle, Kim Ward intercepted a short clearance from the opposition keeper and laid the ball to Josie Groves who had found a pocket of space just inside the opposition’s half and fired a long range shot and hit the back of the net despite the keeper managing to get their fingertips on it. Malet 0 – United 6 and a hat-trick for Josie.

At full time coach Mel Marsden added “what a brilliant Proformance from the whole squad from the first whistle we pressed Malet and never game them time on the ball, the defensive shape was stop on and we are very pleased to keep a clean sheet. These are all things we have been working on in training which are now coming together on the pitch. Any one of the 14-man squad could have got player of the match today as they were all brilliant. We have added another couple of additions this week in Sarah Walters in goal and Kim Ward on the right wing, both had a great game and will offer us a lot as a squad moving forward. We also welcomed back Josie who had been helping out the first team as they have had many injuries and she sealed her return with a hattrick. This week we face league leaders Preston in what we expect will be a difficult game. ”.

Player of the match was awarded to Gemma Bentley for being solid throughout the 90 minutes, not only for defending excellently but also providing the attacking outlet from full back providing overlaps and linking well with Kim Ward and Lucy Witty. A brilliant all-round performance from the development team.

United look to build on this impressive performance as they prepare for their game against Preston AFC as their focus returns to the league.

Player Of The Match Gemma Bentley 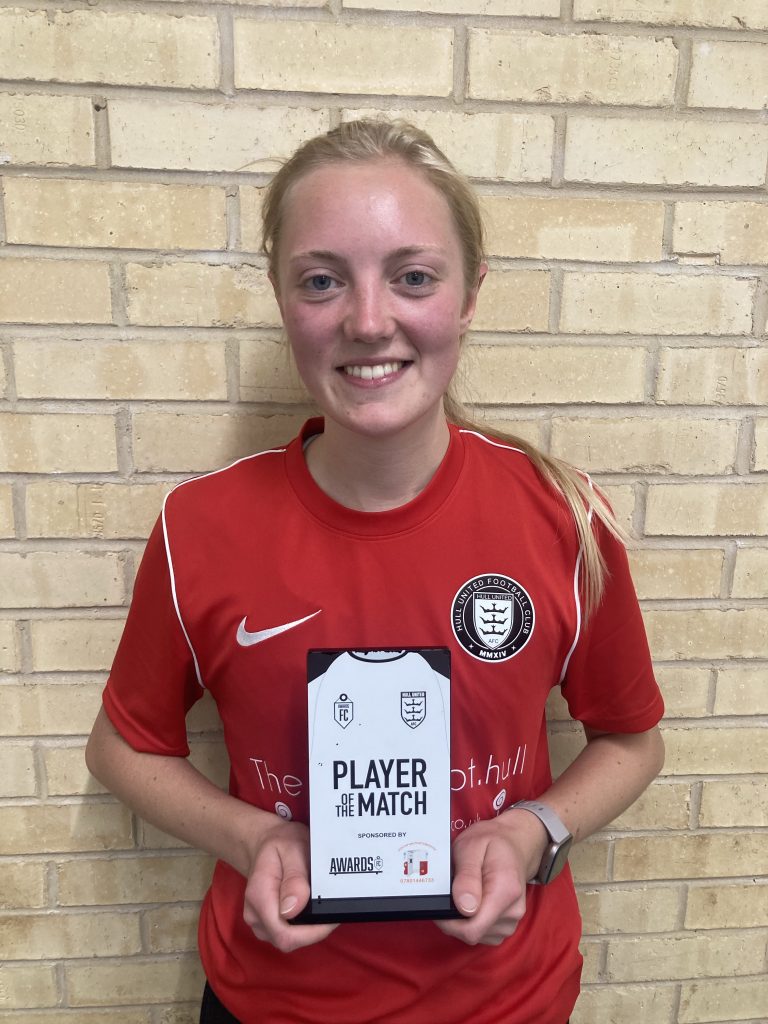