The game started fairly evenly with neither team managing to pose a significant threat to either goal. The back four of Workman, Watson, Cutting and Bentley worked tirelessly keeping out the quick kingswood striker, with Cooke in goal sweeping well.

Whitfield and Griffiths worked hard down the wings playing in Smirk and Hughes numerous times, yet the score remained 0-0. Whitfield and Ayre made way for Neale-Wright and Witty after 30 minutes.

Kingswood started to grow into the game more as the half went on with some good play through the middle. After constant pressure and a slight mix up at the back, with no help from the pitch, a pass back found it’s way into the United net to make it 1-0 to the home side. However the lead didn’t last long when a Pinder corner was cleared to the edge of the box which saw Workman hit an absolute worldie on the bounce into the top of the net to make it 1-1 at half time.

The second half saw Ayre come back on for Witty and the visitors looked to improve on their first half performance. But it was Kingswood to take the lead after a corner was played in onto the head of a Kingswood player and put into the back of the net. Kingswood 2-1 United.

Chasing the game, the visitors were looking for the equaliser, when some individual brilliance from Hughes saw the ball hit the back of the net to make it 2-2.

Manager Marsden changed the formation for the last 10 minutes with United pushing for the winner. Bentley on the left worked relentlessly taking on numerous players and putting in some great crosses. With 15 seconds left to go United found Hughes who poked the ball into the bottom right corner from an even tighter angle than the first. 3-2. The final whistle blew with Hull United winning away from home again, leaving them joint 4th in the table.

Not the best performance from the visitors but they worked hard until the final whistle and take home another 3 points.

The player of the match was given to Katie Hughes for two brilliant goals, late into the game who is proudly sponsored by Chamas.

The ladies are in action next week at home to Malet Lambert Ladies.

Player Of The Match Katie Hughes 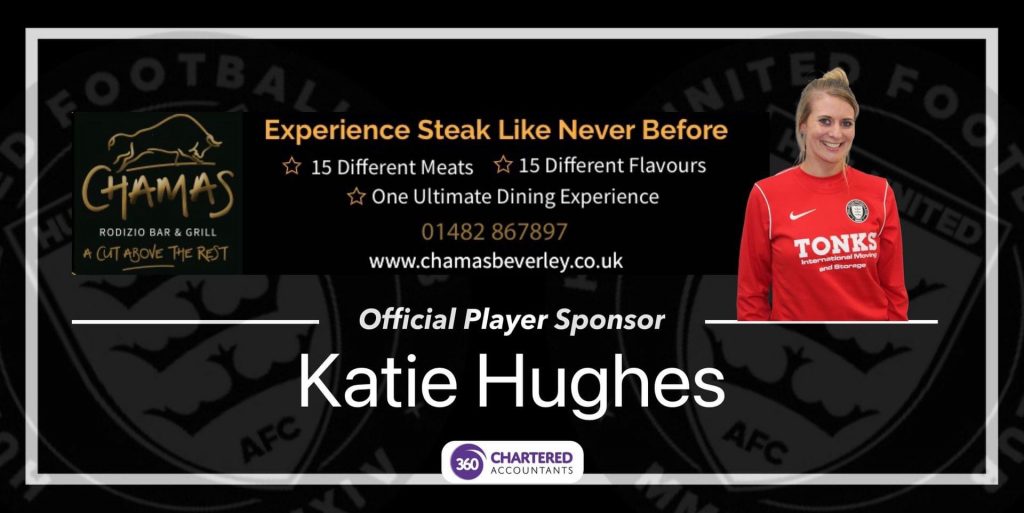