It was a top of the table clash down at Steve Prescott Centre with The Citizens taking on Altofts in a must win game for both teams. United with the chance to really rubber stamp their promotion and Altofts trying to catch them meant that it was set up for a real mouthwatering clash.

United still on their unbeaten run for the season were the favourites for the game however Jack and his Altofts side definitely wanted to end that run.

Manager Lewis Poucher had a very strong squad to pick from for this match with every player available with only Tonya (groin injury) and Chloe Robinson (long term) the exception.

Kirsty Bannister in goal who had been very good over the last few weeks again occupied the goalkeeper spot. In front of her the ever present skipper Becky Walker, Sammie Workman and Eleanor Robinson at full back with Courtney McConville slotting back in alongside Becky.

In the midfield Lauren Holmes, Millie Sharpe and Emma Smith, with a front three of Lauren Tate, Jade Newlove and Amy Ward playing as the number 9. This meant that the bench consisted of some real strength with Millie O’Neill, Suey Smith, Ellie Worsley and Kacey Watson all ready to influence the game when called upon.

The game kicked off as anticipated with some strong battles happening all over the pitch. The tackles and pure desire from both teams meant for a great spectacle. The game continued at pace with United seeming to take a grip on the game and played the ball about well. The first opening came early on with a great ball from Millie Sharp who set Jade Newlove through one on one and calmly slotted the ball past the rushing goalkeeper to make it 1-0.

United continued to dominate the game with the high press that resembles with their play causing Altofts all sorts of problems. Altofts however weren’t keen on the great work Lauren Holmes carried out for the opening 30 mins. Her desire and work rate really gave us the platform to build on. United’s first change was after 30 mins with Lauren dropping out for Suey Smith when the game started to settle and the second change brought Millie O’Neill on for Lauren Tate to continue that fine high press from the front. United for the remaining of the half were unable to find that second goal which would have put them in the driving seat going into the second half.

One change at half time for United created a slight shuffle, Courtney dropping and replaced by Ellie Worsley who slotted in up top, Jade Newlove moving to right back with Eleanor and Sammie changing positions. The second half started and Altofts came out firing, their press and eagerness to win the ball really stepped up in the opening 15 mins. However, the defence even with the switch around in positions really stood up to the challenge which was brilliant to see. The pure desire and work rate man for man was fantastic and really epitomised the performance from United.

As Altofts continued to press and create chances United hit back with a killer goal. The bouncing ball played in by Emma Smith was misjudged by the Altofts keeper and goalscorer Amy Ward stepped up again to deliver and continue her fine form in front of goal to put the home team 2-0 up.

Credit to Altofts they continued to push on and look for a goal however a tactical change to strengthen the defence even further with Kacey Watson coming on for the tirelessly working Ellie Worsley made sure they weren’t going to find a way in. 1 to 15 on Sunday every player played their part to ensure United took all three points to cement them well on course to win the league.

Manager Lewis Poucher added ‘We came up against a very strong side in Altofts. Jack organises his side to be physical and strong and I thought today we really stepped up on that battle. The girls worked so hard for each other and it’s a pleasure to watch and coach. Kirsty again was solid in goal and commanded her area very well. The back five again including Kacey were brilliant and adding another clean sheet to the list for the season, with us only conceding 8 goals. The midfield put in one hell of a shift with Holmesy, Sharpie, Smithy and Suey all playing brilliantly and doing exactly what was asked of them. Then the front five of Jade, Lauren, Lauren, Wardy, Ellie and Millie worked so hard to press them it was a real pleasure to watch. We have three more league games left and I am sure with the right attitude and application we can get over the line. However this week we turn our attention to a tough encounter in our semi final cup game against South Cave. This won’t be an easy game for the girls as Cave will be looking for an upset. We need to prepare well at training to make sure we are ready for Sunday.

Man of the match this week was Lauren Tate, she worked so hard for the team constantly putting her foot in and was always causing problems for their defence. A great game by her once again. Well done Lauren 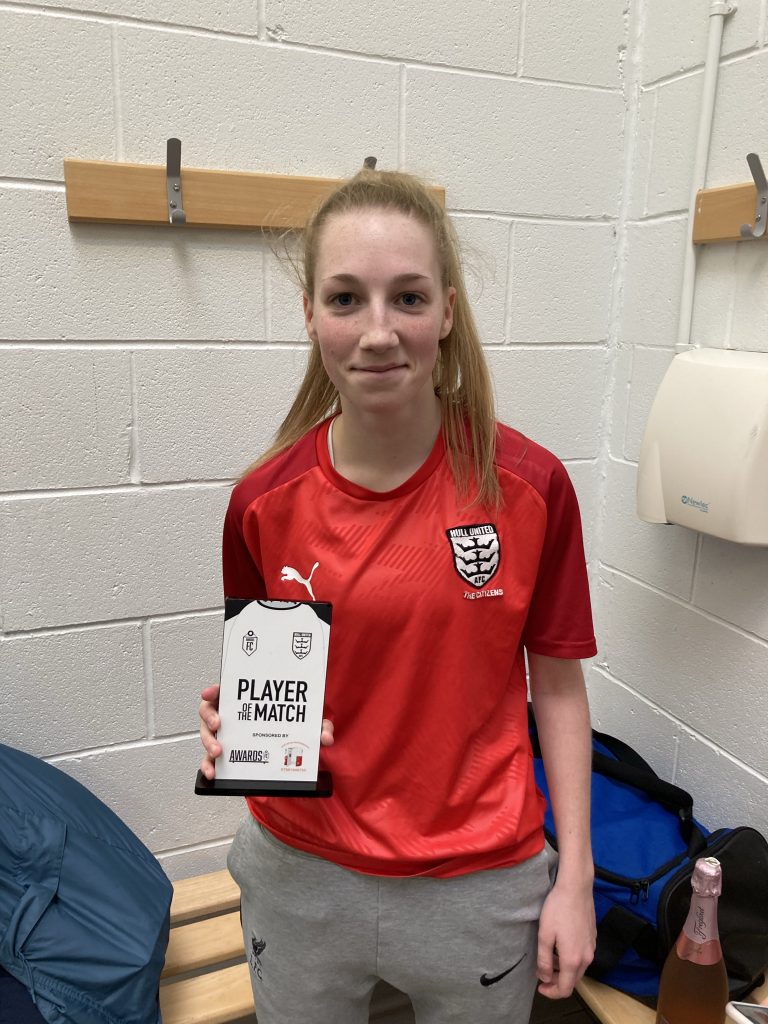