Hull United finally had their first game of 2023, after last weeks game been postponed due to a water logged pitch, United hosted South Shields at home. Having played the reverse fixture back in October and United came out on the receiving end of a 2-1 defeat, United were looking to seek their first victory of the 22/23 season. United had a squad of 15, with Anya Ibbotson, Jess Robinson and Jess Derbyshire all making their first team debuts. United lined up in their usual formation, with Cone in between the sticks, Randell, O’Rourke, Sharp and Robinson were in the back 4, the midfield consisted of Holmes, Tankard and Tate, with Damms, Groves and Lisle in the front 3. The bench consists of the 3 debutants and Newlove,recovering from an illness. The game got underway and straight away the visitors looked to punish United, they started fast and looked to give an early lead, which after 9 minutes their winger gave them the lead with a cross-shot giving Cone no chance. This seemed to wake up up United and United started playing football and grew more and more confident. The 20 minutes mark hit and a rational decision from Cone saw her be sent off after denying a goal scoring opportunity with her arms outside of the box. This lead to Robinson stepping up and going in goal. This didn’t faze United and from the sidelines you wouldn’t have even known they had 10 men. 16 year old winger Ibbotson and Robinson were both introduced to make their debuts. Shortly after Robinson let fly and marked her debut with a well taken goal. Half time 1-1

United came back out the second half ready and raring to go, they looked to start quick, pass the ball around Shields and look dangerous, and in all fairness they did. Whatever South Shields through at United, United through back harder. Derbyshire was introduced mid way through the second half. The game begin to become a battle with both teams looking to score to put their team ahead, however this came at a cost as this saw Tate break free just inside the oppositions half, her determined run saw her get to the edge of the box before been fouled and a yellow card was given to the Shields player. Up stepped sharp however the effort saw the Shields keeper watching it over the bar. Tankard worked tirelessly in midfield aiming to create opportunities for the front 2 as well as been a solid block for the back 4. A few tackles and heated moments later, saw Captain Holmes shown a yellow card aswell. The final 20 minutes came and Shields really put on the pressure, they tried and tried to break United down. However many times they tired they were unsuccessful, a challenge from sharp on the edge of the area saw her the 3rd victim of the day to receive a card from the referee. A shot which Robinsons touched onto the bar but then unfortunately hit the back of the leg and ended up in the back of the United net saw Shields go 1-2 up. United fought back for the final 15 minutes of the game, despite their efforts they couldn’t convert that equaliser in which they fully deserved. Full time 1-2

Next week, United have Alnwick Town at home which is set to be another tough test for the Ladies but one they are preparing for by working hard in training! Player of the Match today couldn’t be split between Lily Tankard and Millie Sharp, both outstanding efforts today for the team. 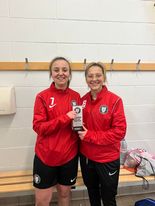