This week Hull United Women’s Development travelled to Langtoft in the County Cup. Both teams started strong but Hull had the upper hand and broke the deadlock 7 minutes in with Emma Johnson putting the ball into the back of the net and Nellie Rawson with the assist. Langtoft pushed back and had some good spells of play without troubling Kacey Watson, Jess Stockdale, Ellie Worsley, Charlie Holmes, in the United defence too much.

20 minutes in Chamaine Pinder played the ball through Langtoft’s defensive line for Nellie to slot the ball home putting United 2-0 ahead. United grew into the game with the midfield three of Chamaine, Emma and Chelsey Atkinson taking control of possession and providing the forwards, Jamie-Leigh Neale-Wright, Izzy Grant, and Nellie with some great attacking opportunities. 10 minutes of the half to go, Ellie Worsley drove forward from defence and fired a long range shot from outside the area to put Hull 3-0 up. United kept the ball well across the pitch but were unable to hit the target after a few wide attempts and hitting the cross bar. The half time whistle blew, 3-0 to United.

The game restarted in the same way the first half finished, United on top and keen to add more goals. Around 57 minutes in Ellie Worsley made an attacking run down the right wing and ran onto a well-placed through ball from Carmen Hall to make it 4-0 with her second goal of the day. A couple of minutes later Hannah O’Malley added the fifth after a long range shot from Chamaine was blocked and Hannah was able act quickly on the rebound. Hull’s concentration dipped allowing Langtoft to break through the lines and challenge Kirsty Bannister in the United goal, however they were unable to convert their chances.

After a wobbly 5-10 minutes, United were more composed on the ball with some great work from Natasha Linford and Jamie-Leigh. 70 minutes on the clock and Chamaine found a pocket of space on the edge of the area and buried the ball in the back of Langtoft’s net with a brilliant long range effort, Langtoft 0 – 6 United. Emma Johnson was able to get her second and United’s seventh after being on the receiving end of a cross from Pinder. Jamie-Leigh and Emma linking up well and Emma providing the through ball for Jamie-Leigh to place the ball beyond the keeper a few minutes before the final whistle to put herself on the scoresheet. The final whistle blew, Langtoft 0 – 8 Hull United Development.

A great team performance with some great possession in each third of the pitch. Player of the match went to Hannah O’Malley for a brilliant overall performance as well as adding to the scoresheet.

Next weekend the ladies are back to their league fixtures where they travel away to Pinefleet AFC. 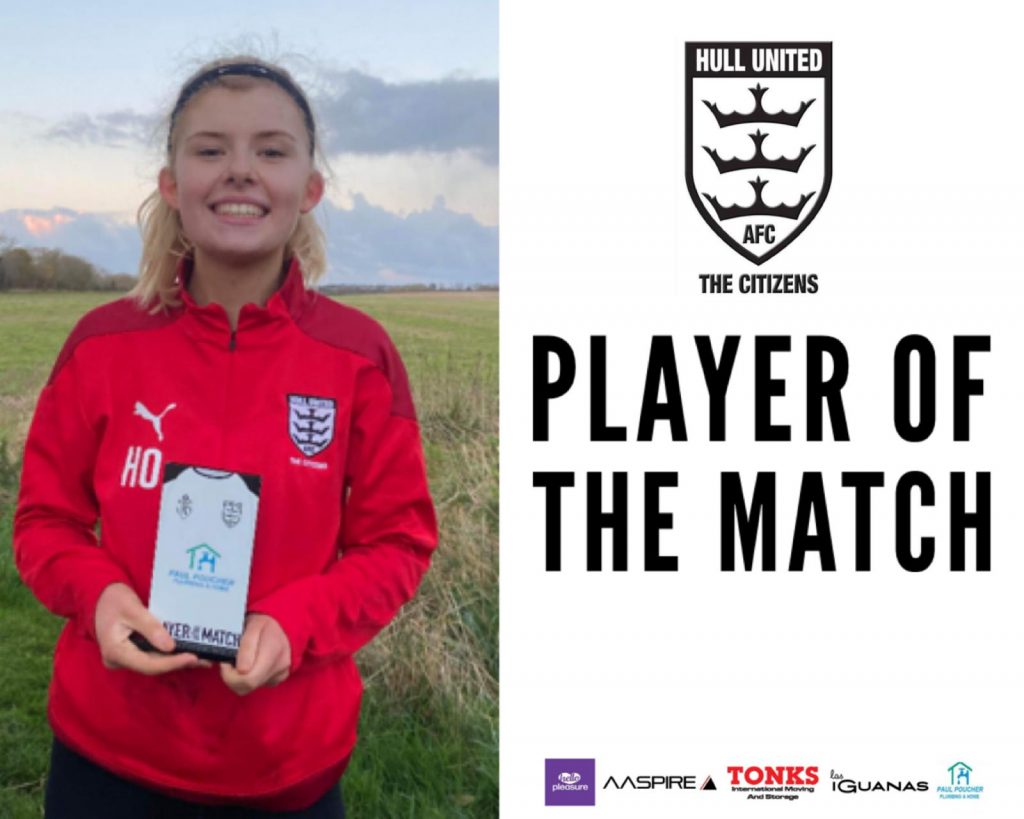