This week Hull United Ladies Development faced South Cave at Home in what is always a tough fixture.

The home side started well, passing the ball around with confidence and after 7 minutes some neat work between strikers Hughes and Neale-Wright, saw the Neale-Wright place the ball into the back of the net. The lead was short lived, as a well taken strike left Cooke in goal with no chance.

United regained the lead after Robinson picked up the ball 30 yards out, this time leaving the opposition keeper with no chance. South Cave responded quickly with a well worked goal making it 2-2. After hard work from Derbyshire and Ward on the wings they were replaced by Ibbotson and Kerrison. The half time whistle blew and the score remained level at the break.

Neale-Wright made way for Newlove after the break. South Cave came out the stronger of the two sides scoring from range just minutes after the restart. United found themselves behind again but Robinson stepped up once more and hit a brilliant freekick, once again leaving the keeper with no chance.

Hull United continued to play some fantastic football, which was unfortunately undone by a long ball from the South Cave keeper, leaving the striker 1 on 1 with Cooke, a well taken goal made the score 3-4 to the visitors. United continued to push for the equaliser with full backs Bentley and Holmes doing brilliantly to play out from the back. But unfortunately it wasn’t to be for United and a defensive slip up left the Cave striker 1v1 with the keeper, killing the game off to make it 3-5 at Full time.

Despite the result not going our way, the ladies played some brilliant football, working hard on and off the ball producing a thrilling watch for the many supporters. Player of the match went to CJ who had a great game at left back.

Manager Mel Marsden Added ” what a great game of football, one that could of gone either way. Credit to south cave who came and put us under pressure and came out on top. The girls showed that we can get the ball down and play today, the things we are working on in training we are now implementing on a match day, which is great to see. The squad is improving week on week and as a coach that’s all I can ask, we will work on the little things that cost us today and look to improve again next week.”

Next week the ladies face Preston in the League, another tough game but one we are looking foward too.

Player Of The Match Charlie Holmes 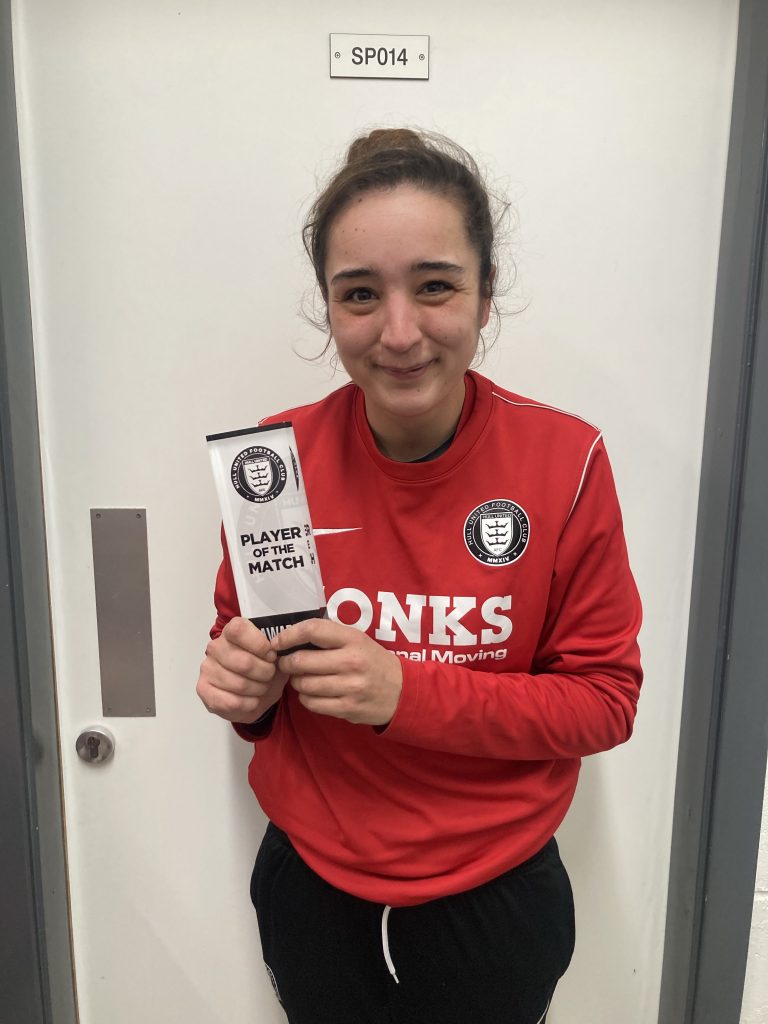