This week the Ladies’ Development team had their last game of the season at home to Beverley Town. Due to a number of absences and injuries United were left with the bare 11 and without their regular goalkeeper.

United started strong with the centre backs, Kacey Watson and Skie Wyatt, protecting Phoebe Whitfield who stepped up and when in goal for United. Charley Sutherby and Jess Stockdale at full back providing some width to the team and supporting the midfield. United had a number of attacks with Jamie-Leigh Neale-Wright leading the United line with Izzy Grant and Charlie Holmes in support, however they were unsuccessful due to some good saves from the Beverley Town goalkeeper. The deadlock was broken after an unsuccessful United corner was pounced on by Beverley and they were able to counterattack and convert their chance, United 0 – Beverley 1. United pushed back with United’s captain Charmaine Pinder taking control of the midfield and communicating well with Hannah O’Malley and Evie Barrett as they worked the ball up the pitch providing opportunities for United’s front 3. Jamie-Leigh was able to break through Beverley’s defensive line after some great play between Charlie Holmes and Jess Stockdale on the right hand side, yet once again Beverley’s keeper stopped United in their tracks. Shortly before the half time whistle an opportunity opened up for Beverley when they found a pocket of space in the centre of the pitch and drove the ball into the bottom corner of the United net. Half time came and United went in 2 nil behind.

United started the second half strong after making a couple of positional changes with Charley Sutherby and Charlie Holmes swapping roles. Phoebe Whitfield volunteered to stay in goal and continued to prevent Beverley from adding more to the scoresheet through some great saves. United worked hard despite the heat supporting their teammates in all areas of the pitch. Jamie-Leigh worked well with Charley and Izzy Grant and caused the Beverley defence to put in some last ditch challenges which resulted in a free kick 5 yards outside of the opposition area. Charmaine stepped up and drilled the ball low past the Beverley wall but just missing the outside of the goalpost. As the game progressed and both teams started to tire, due to low numbers and the heat, it was great to watch the battle between both squads for the remainder of the half. With about 20 minutes to go United gave away a sloppy free kick in Beverley’s half. The Beverley defender was able to fire a long range ball through the United’s defence for their attacker to be on the receiving end to put it in the back of the net. United’s heads didn’t drop and they continued to fight until the final whistle but were unlucky to not convert their chances. The final whistle blew, Hull United 0 – 3 Beverley town. Overall, it was a well fought battle between both the teams and an excellent team performance by United.

Player of the Match was thoroughly deserved and went to Phoebe Whitfield for an excellent performance and producing some great saves throughout the game. 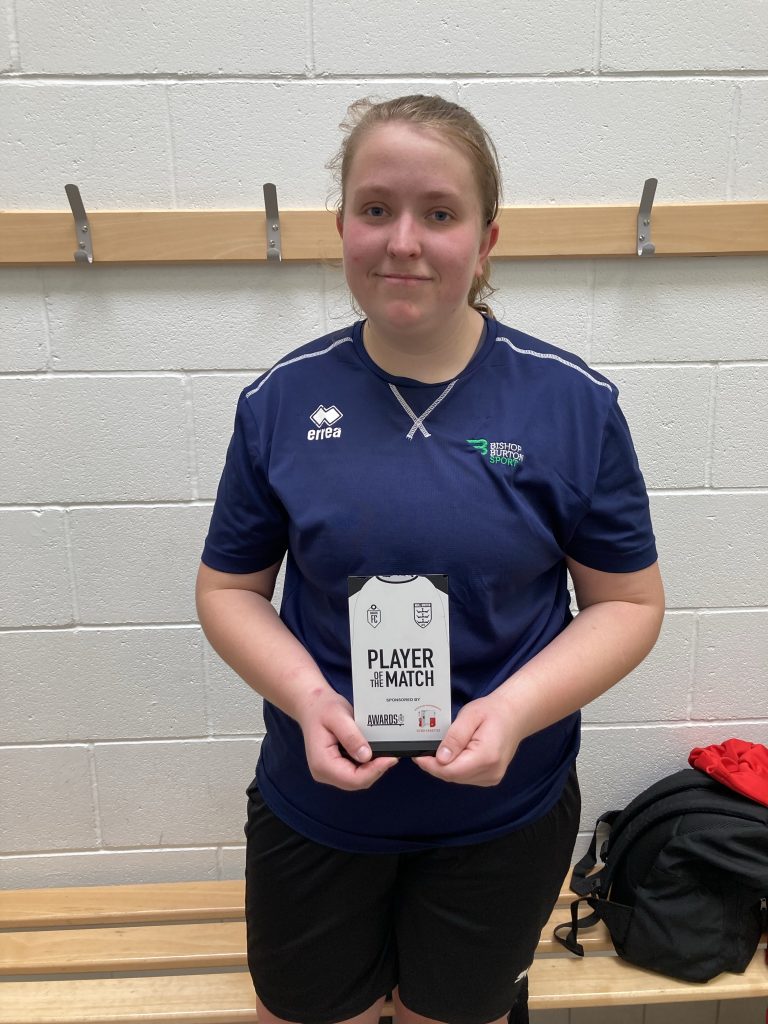