After a hard fought victory last week, Hull United ladies development travelled to Hessle looking to make it 4 wins in a row.

Hull United started really well, getting the ball down and keeping possession. After some great link up play on the right between Charlie Holmes, Katie Hughes and Kim Ward, Hughes delivered a great cross into the box for Dani Walker Muff Burke to tap in only 3 minutes into the game. Hull United continued to dominate with the back 4 of Holmes, Skie Wyatt, Kacey Watson and Gemma Bentley dealing with everything, leaving Meg Cooke in goal with little to do. 25 minutes in Hughes won the ball back high up the pitch, spotted the Hessle keeper off her line and finished with a fantastic lob to make it 2-0. Lucy Witty came on after 30 minutes, working hard on the wing to link up with the strikers. Half time came with the score 2-0 to the visitors. With a fairly dominant performance in the first half from United, manager Marsden and assistant manager Robinson were looking for more of the same in the second half.

Hessle started the second half well creating some good link up play, but didn’t manage to threaten the United goal. Phoebe Whitfield came on at full back working well with Pinder and Ward on the right. 60 minutes gone and captain Chamaine Pinder hit a 25 yard worldie into the top left corner of the goal making it 3-0. After this the goals came in quick succession with Ward putting in a great cross to Ellie Smirk who laid it off to vice captain Aimee Ayre who hit a low driven strike into the back of the net. Kim Ward soon got her name on the score sheet when after a poor clearance from Hessle, she saw the opportunity and hit another worldie for the visitors into the top left corner off the post. United 5-0 Hessle. 70 minutes on the clock and another good cross from Ward was met by Smirk, who once again set Ayre up on the edge of the box who found the bottom left corner of the Hessle goal. The 75th minute saw striker Freya Hendrickson subbed on to help see United through to the 3 points. Full time whistle blew, United 6-0 Hessle.

Assistant Manager Robinson added “I thought the girls were brilliant, we knew it would be a tough match and the girls needed to turn up and graft for 90 minutes to get the result. The first half we started well and got the ball down but were panicking in spells trying to do the killer pass, which meant we lost possession at various points in the game. We were working on pressing and playing out from the back which the girls did brilliantly working against a high Hessle back line. Dani scoring 3 minutes into the game gave us the drive to push on and press high. The second half was very much the same as the first half but the girls were more composed on the ball and retained possession playing the simple ball. The girls followed the game plan, maintained their structure throughout which made it difficult for Hessle to break through. The girls are building week on week but this performance had everything, including some brilliant goals from the midfield pair. On overall great performance and another clean sheet.”

On Sunday United return to Steve Prescott and will face Hall Road Rangers in the Quarter Finals of the East Riding Cup.

Player Of The Match Charmaine Pinder 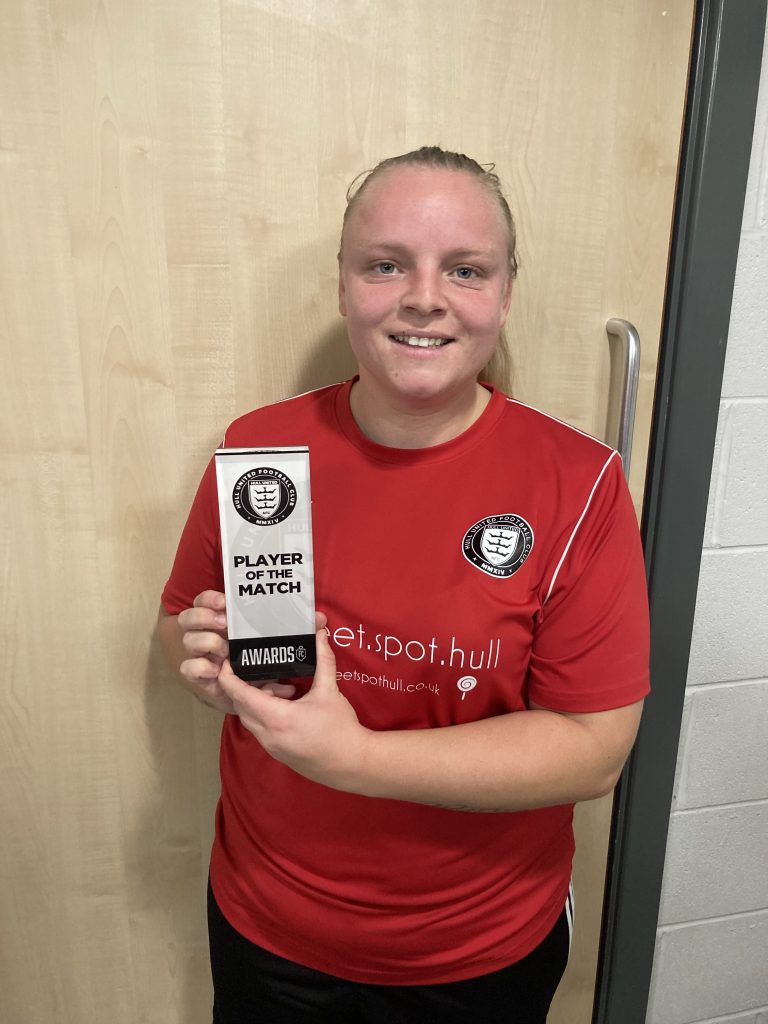